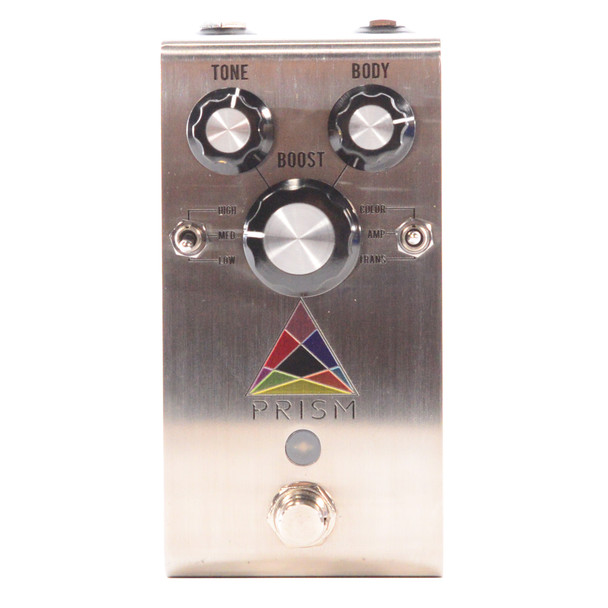 Over 5 years ago we released and launched Jackson Audio with the PRISM. The PRISM has remained one of the best-selling products and to celebrate we are offering an Anniversary Edition PRISM. We are doing a very limited run of 250. The colors in the PRISM logo are translucent making it possible to see the grain of the all Stainless Steel Enclosure which creates a beautiful "stained glass" effect.
Designed as the ultimate tone shaping tool for a player’s pedalboard, the PRISM is a buffer, boost, preamp, EQ and overdrive all in one beautiful and compact stainless steel enclosure!

“I love it! It’s like Photoshop for guitar!” – Mateus Asato

Much like an optical prism, which takes white light and breaks it apart into the different colors, the Jackson Audio PRISM takes your guitar’s natural tone and allows you to boost it, shape it and transform it into a new tone that is uniquely you!

Use it shape your tone, slam the front of your amp or add new dimension to your existing pedals, any way you use it, we believe the PRISM will be the cornerstone of your rig for many years to come!

The PRISM was designed using a systems approach to tone shaping. While the PRISM contains many features and circuits, those circuits are precisely crafted to work in harmony with each other to create a unique tone shaping tool with unrivaled flexibility and performance!

Housed in a custom designed stainless steel enclosure that features laser engraved artwork, the PRISM is one of the few pedals on the market that looks as good as it sounds! Keep reading below to learn more about what makes the PRISM so unique!

The PRISM was conceived between Brad and Nigel as a tool that players could use to unify their rigs regardless of the guitar being used. Since many guitarists will swap guitars but keep the same pedalboard and amp, we wanted to create a tool that would allow the players to re-voice their rigs for the guitar chosen and the +/-15dB active EQ in the PRISM accomplishes this with ease.

This active EQ gives an incredible amount of tonal control and range and has ZERO interaction between the BODY and TONE controls. Having ZERO interaction means as the player adjusts the TONE it will only adjust the high frequency response and not cause the low frequencies to shift and the same is true for the BODY control.

Perhaps the most useful feature of the active EQ in the PRISM is that when placed at the front of the players rig and used as a master EQ, the PRISM will allow the player to dial in their tone using ONE pedal and will prevent them from having to adjust the EQ of every pedal in their rig when changing guitars, amps or venues.

As a boost/preamp the PRISM contains three of the most distinct voices of boosts available. A transparent clean boost with no tonal coloring (TRANS), a boost that emulates a vacuum tube amp (AMP) and finally the boost circuit that started it all, the silicon treble booster (COLOR). These three circuits represent over 50 years of guitar effects from the earliest guitar pedal ever made to the more modern transparent voiced circuits.

Each boost/preamp circuit in the PRISM is totally discrete and shares ZERO circuitry with the other boost circuits. We did this so that each circuit would be completely true to its own voice and not have to compromise its sound for the sake of cost cutting or space economy. In fact every circuit is contained in its own true bypass loop so there is never any additional circuitry in the signal path.

Traditionally most players will use a boost/preamp pedal to drive the front end of a tube amp into overdrive and the PRISM does this very well given its huge amount of output however we encourage players to experiment by placing the PRISM at the front of their pedalboards and enjoy the host of new tones available as the PRISM boosts their existing pedals!

Note: To take full advantage of the PRISM we recommend placing it first in the signal chain as its active EQ will be most effective in that position and the treble booster circuit (COLOR) works best when connected directly to the guitars output. Treble booster circuits in general are known for cleaning up very dramatically when rolling back the volume control on the guitar and the PRISM is no different. For these reasons we recommend that the PRISM be placed first in the signal chain.

The PRISM is a true bypass pedal featuring our own silent switching circuitry and uses relays with a soft touch momentary contact footswitch to accomplish the bypass. We chose relay bypass because it is far more reliable than traditional mechanical true bypass methodologies and the relays themselves boast a lifespan of over 100,000 cycles!

At the very end of the PRISM we included a high current buffer that is used to strengthen your signal and preserve your tone regardless of how complex your pedalboard is or how long the cable run is back to your amp.

An extremely powerful active EQ, the TONE control adjusts the high frequencies by giving a +/-15dB boost/cut to those frequencies.

Selects between 3 varying levels of gain for each boost circuit.

The BYPASS SWITCH is used to turn the PRISM ON/OFF and is also used to enter programming mode.

To enter programming mode, press and hold the BYPASS SWITCH for five seconds.

While in programming mode, rotate the BOOST control to set INDICATOR LIGHT brightness.

Press the BYPASS SWITCH three times to toggle the active state of the pedal between boot up ON (green) and boot up OFF (yellow).

Press and hold the BYPASS SWITCH for five seconds to save settings.

An extremely powerful active EQ, the BODY control adjusts the low frequencies by giving a +/-15dB boost/cut to those frequencies.

The BOOST control sets the overall level of boost available from the PRISM. Think of the BOOST control as a master volume that works in tandem with the PRE GAIN switch to dial in the ratio of gain to boost level.

Selects between the 3 boosts circuits available in the PRISM.

The INDICATOR LIGHT indicates the ON/OFF status of the PRISM and changes colors to give a visual indication of the level of boost selected.

Free Shipping- Most orders $50.00 and over ordered from themusicden.com SHIP FOR FREE, but there are two exceptions: Orders that are being shipped to a location that is not in the lower 48 United States will NOT ship for free. Also items marked as "Oversized" will NOT ship free. Those orders will ship using our Standard Shipping rate.

Standard Shipping- This is the default shipping method for orders shipping to a US state that is not in the lower 48, such as Hawaii or Alaska, Puerto Rico, or an APO/AE order. Whether an order is shipped USPS or UPS is at The Music Den's discretion depending on what the situation may require.

Orders made through www.themusicden.com will only ship to United States. We are unable to ship internationally.

It may take one to two business days to process an order before it is actually shipped out.

School Servicing- Items will be delivered to the school on our next scheduled weekly visit.

In-Store Pickups- You can choose to pick items up at our Randolph Store. Please call ahead to make sure that your item is at the store before coming to pick it up. Be prepared to present identification and the purchasing credit card during pickup.

Curbside Pickups- Between 10am-5pm, Monday-Friday, you can choose to pick items up at our Randolph Store and have them brought out to you. Please wait for a confirmation email that your item is ready to be picked up. When you arrive you can call the store at 973-927-5800. Be prepared to present identification and the purchasing credit card during pickup.

The Music Den wants you to be fully satisfied with your purchase. The Music Den has a cash back return policy for all online returns 30 days from the date of sale. (Note: This does not apply to Reverb. Please see Reverb for their specific policies. For In-store purchases please refer to your receipt.) Please read the items below carefully to ensure that your Item Return is done correctly.

To return an item purchased online from www.themusicden.com, you must notify The Music Den within 30 days from the date of the sale to receive an RA#.

All returns must have an RA# (Return Authorization Number). To receive an RA#, Please call 1-800-479-1189 or click here to send us an email. Do not forget to mention your customer number and order number so that we can expedite your request.

All Returns must be received by the Music Den within 10 days of the day you received the RA#.

All shipping costs are the responsibility of the customer and are non-refundable.

Special orders can only be returned at the discretion of a Store Manager with a restocking fee added. All deposits on special orders are non-refundable.

When you ship your item, make sure that your RA# is printed clearly on the outside of the package.

Ship the item to:

MSRP:
Music Den Price: Music Den Special: $249.00
The BELLE STARR is the result of a several months-long collaboration with Drew Shirley from the band Switchfoot. If you're familiar with Drew's rig, he has always run super small, low-wattage amps,...
Add to Cart Quick view

MSRP:
Music Den Price: Music Den Special: $259.95
Designed as the ultimate tone shaping tool for a player’s pedalboard, the PRISM is a buffer, boost, preamp, EQ and overdrive all in one beautiful and compact stainless steel enclosure! “I love...
Add to Cart Quick view

MSRP:
Music Den Price: Music Den Special: $329.00
The BLOOM from Jackson Audio is a comprehensive dynamic engine that is designed to give guitarists maximum dynamic tonal control in ways never before possible. The BLOOM v2 – MIDI takes everything...
Add to Cart Quick view

MSRP:
Music Den Price: Music Den Special: $249.99
"SPECIAL EDITION! Limited to 100 pieces in the Belle Starr's and Stripes Colorway!We are discontinuing the Belle Starr and to give it one last hurrah before we do, we are releasing a limited edition...
Add to Cart Quick view

MSRP:
Music Den Price: Music Den Special: $2,499.00
Classic Bolt-on Feel with a Sound All its Own Since the dawn of rock and roll, the snap and response that comes from a bolt-on neck guitar has been an essential part of the mix. These attributes...
Add to Cart Quick view

MSRP:
Music Den Price: Music Den Special: $2,599.00
Classic CE Character with Semi-Hollow Style Combining the snap and sustain of a bolt-on guitar with the airy resonance of a semi-hollow body, the CE 24 Semi-Hollow is a truly unique addition to the...
Add to Cart Quick view